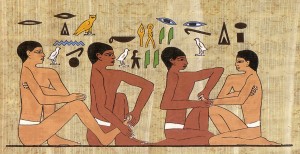 In 2500 – 3000 b.c. there is evidence in the physicians tomb. The hieroglyphics shows the physician applying pressure with hands to the soles of his patients feet. It is considered that why the patient has one hand held under his armpit is that he believes that as the healing energy is released in his body as he has reflexology, he feels the need to trap the energy back into his body by placing his hand in this position.

In India a country whose history has largely been shaped by religion the feet were thought, 5000 years ago to symbolise the unity of the entire universe. The Sanskrit symbols depicted on the feet of Buddha were seen as expressions of a higher reality.

By 100 ad Buddhism had spread to China and by the dedication of the monks so did reality. Reflexology was practised in China 4000 years ago as part of acupuncture and moxibustion.

A Japanese monk studying in China is given credit for introducing reflexology to Japan upon his return home.

The actual word Reflexology was coined by a psychiatrist in Russia, a country were reflexology was recognised first in the late 1800’s for its psychological benefits.

The Russians beginning with Drs Ivan Pavlov and Vladimir Bekhlerev, had been exploring reflexology and responses in the body for nearly a century when in the 1890’s knighted researcher and medical doctor Sr. Henry Head demonstrated the neurological relationship that exists between the skin and the internal organs.

In the early 1900’s when returning to the United States from Vienna it is believed Dr. William H. Fitzgerald was introduced to Reflex Therapy and has since earned himself the recognition as the modern originator of reflexology in the USA. Dr. Fitzgerald discovered a very interesting fact that the application of pressure not only relieved pain but in the majority of cases also relieved the underlying cause as well.

To-day research studies are conducted all around the world. Chronic conditions are seen to respond especially well to reflexology. In China where reflexology is accepted by the central government as a means of preventing and curing diseases and
preserving health over 300 research studies have shown reflexology provided good improvement in 95% of over 18,000 cases covering 64 illnesses studies.

In Japan and Denmark reflexology has been incorporated into the employee health programmes of several large corporations saving each company thousands of dollars annually in paid out sick leave benefits.

With such a rich history it is no surprise that reflexology has continued to evolve.
In recent years there has been a resurgence of interest in hands-on-healing techniques such as reflexology as people become disenchanted with the side effects of modern day drugs and surgery common to traditional western medicine.

We are re-discovering that Nature has always provided the means by which to heal ourselves and maintain good health.

Our hands really were meant for healing!